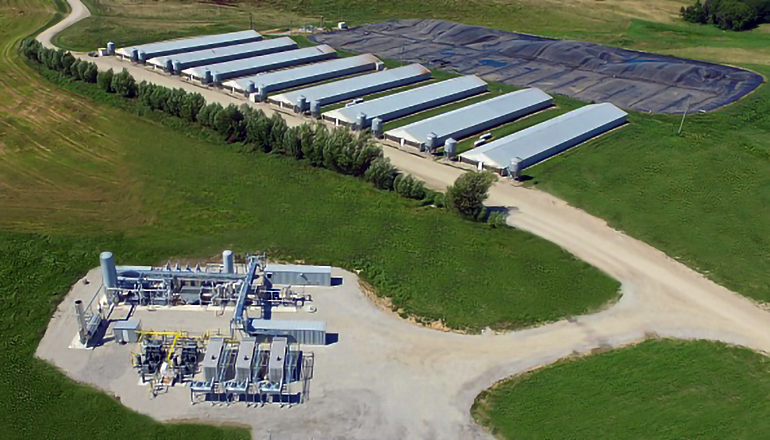 The Monarch Bioenergy Project was discussed at the Trenton Rotary Club meeting on October 14. The project is a joint venture between Smithfield Hog Production of Princeton and Roeslein Energy of Saint Louis.

Smithfield General Manager Michael Rainwater and Roeslein Director of Communication Brandon Bulterz talked about the project, which allows methane gases generated by Smithfield farm lagoons to be captured and turned into energy. The project has been ongoing for 10 years.

The project involves 83 lagoons on eight Smithfield-owned farms. The methane gases generated by the lagoons is transported through a pipeline to a purification system that turns it into an energy source. The energy is made available to the national grid for use throughout the country. The first energy was produced in 2016.

It was noted the energy produced at the lagoon on the farm near Milan provides the City of Milan with the majority of its power, including the power used to operate the Smithfield processing plant there.

More than $150 million has been invested in the process, which keeps methane from going into the atmosphere. Smithfield and Roeslein are also partnering with other groups in a prairie grass restoration effort at two farms.

Rainwater gave an update on Smithfield and its economic impact in the area, which is estimated to be around $1.6 billion per year. The company has 815 employees with 48 company-owned sow farms and two company-owned feed mills with seven elevators.

During the business meeting, it was announced the Rotary District Foundation Dinner would be in Kansas City on November 5. Members who want to attend were asked to sign up. The Trenton club will have a table of 10 at the event in recognition of its support for the Rotary Foundation.

Members were reminded that if they make a $500 donation to the Foundation by October 24, the district would match that amount to designate a Paul Harris Fellow.