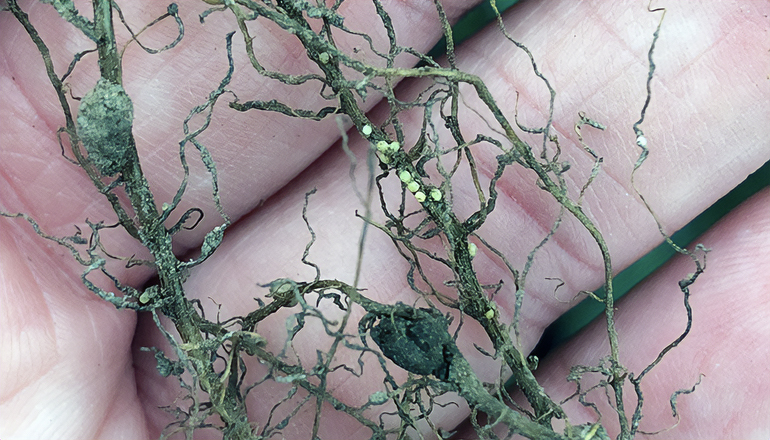 Missouri farmers can submit two free tests to SCN Diagnostics through county University of Missouri Extension centers or directly to the SCN Diagnostics laboratory, Bissonnette said. SCN Diagnostics is a plant and nematode screening service based in the MU College of Agriculture, Food, and Natural Resources.

United Soybean Board checkoff dollars fund the free tests as part of efforts by the SCN Coalition to raise awareness of the pest. The coalition is a public-private partnership of industry representatives and university researchers and specialists, including those from MU Extension.

SCN is the No. 1 soybean pest in the United States, accounting for more than $1.2 billion in crop losses per year.

SCN began spreading quickly through Missouri in the 1970s and gained a foothold in most of the state’s soybean-growing counties by the 1990s. SCN is easily transported in soil. The cysts and eggs spread via equipment, water, and wind.

Nearly all SCN-resistant soybean varieties have the same source of resistance: a breeding line called PI 88788. SCN populations are becoming increasingly resistant to PI 88788. This makes it critically important to sample for SCN egg counts every three to five years, Bissonnette says. Bissonnette explains how to sample at this link. Resistant varieties are still effective, but more nematodes are reproducing on varieties with the PI 88788 resistance source than 10 or 20 years ago. That means your egg count could be going up faster even if you are using a resistant variety.

SCN symptoms include stunted growth and yellowing, but yield loss can happen even when there are no visible symptoms, Bissonnette says.

There are four main ways to manage SCN: 1) test your fields to know your numbers; 2) rotate resistant varieties; 3) rotate to non-host crops, and 4) consider using a nematode-protectant seed treatment.

For more information, contact your local MU Extension center or SCN Diagnostics at [email protected] or 573-884-9118. Sample submission forms are available at this link.