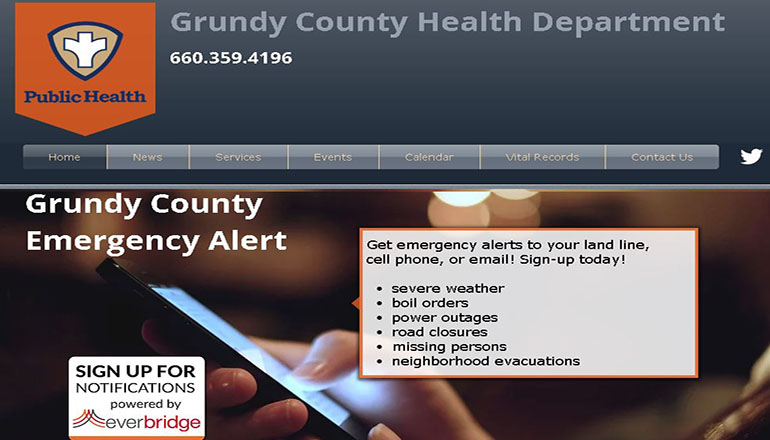 Updated Missouri Department of Elementary and Secondary Education and Department of Health and Senior Services guidance was discussed at the Grundy County Health Department Board of Trustees on October 13th. The board also accepted a draft audit report for 2019 and 2020. Other than board members, a few health department employees and community members attended.

Anna Muselman asked specifically about how Test to Stay for schools worked. Missouri School COVID-19 Operating Guidance provided at the meeting explains the option involves students, teachers, and staff identified as close contacts continuing to attend school and participate in extracurricular activities if certain criteria are met. The criteria include the close contact not being a household exposure, not developing symptoms throughout the full duration of the quarantine period, wearing a mask consistently and correctly, and receiving a minimum of three rapid antigen tests during the first seven days of the quarantine period.

Brandon Gibler commented he heard there was no rapid testing for asymptomatic people in Grundy County. Board Member Korynn Skipper said that would have to change if Test to Stay was implemented.

She mentioned at least one kind of rapid test involves five nostril swirls and does not involve sticking a swab far up the nose.

Pleasant View R-6 Superintendent Rebecca Steinhoff said she was worried about the cost of rapid tests for students without health insurance if Test to Stay was put into place. Grundy County R-5 and Laredo School Nurse Angela Huffman said there was a minimum of $30,000 of funding that would be provided to a school for testing if the school implemented Test to Stay.

Skipper stated she was surprised the Trenton R-9 Board of Education did not vote to implement Test to Stay. She said there would be support for school nurses. She acknowledged the updated guidance on Test to Stay had just been released, though, so there was not much time to consider the information.

Board Member Phillip Ray noted that nothing with COVID-19 has remained the same for long, and there might be a reason the school board did not yet decide to go with Test to Stay. He said the district might want to seek legal counsel before taking action.

Gibler said he was not speaking for the school board, but he thought one reason the board did not vote to implement Test to Stay yet was because members were worried the amount of testing would snowball.

Ormsby stated the health department is supportive of school districts.

Regarding the draft audit report for 2019 and 2020, Gibson reported there were no corrective actions.

Gibson also reported the health department is offering all three types of COVID-19 vaccines. She hopes to get PCR testing going in the next few weeks.

Ray commented he was worried about health department nurses burning out.

Gibson stated the health department is no longer working weekends, except for reaching out to people by text on Saturdays regarding COVID-19 contact tracing. She said the text says someone will call the people Monday. She noted doctors’ offices give results.

Ray said he would like to see staff members go home and not work, so they can get a break.

Skipper said that, by this time, residents should know what they should do.

Board Member Cari Blackburn said the health department nurses should rely on doctors to give information on weekends.

Ray asked why the well-child clinics were discontinued, and Gibson said there was a lack of attendance. Community Health Nurse Sherry Searcy reported toward the end of the health department offering the clinics only about three people attended each one, but those who attended were appreciative.

Gibson noted that there used to be about 15 people attending each when there were two well-child clinics per month. She said she was not sure what had changed.

The next Grundy County Health Department Board of Trustees meeting was scheduled for November 10th at 5:30 in the evening.