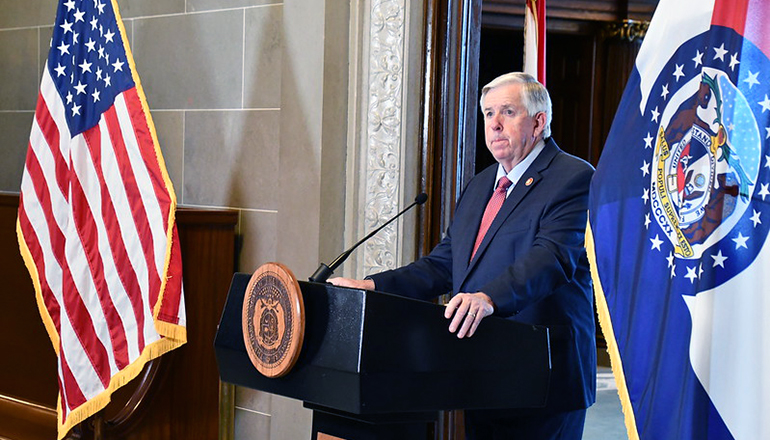 (Missouri Independent) – Gov. Mike Parson escalated his war with the St. Louis Post-Dispatch on Wednesday when his political operation published a video doubling down on his attack against a reporter who informed the state that a state website revealed teacher Social Security numbers.

The video is produced by Uniting Missouri, a political action committee created by Parson supporters to back his 2020 election campaign. The PAC continues to raise and spend large sums of money to promote Parson’s political agenda. It operates without direct input from Parson on its activities.

“The St. Louis Post-Dispatch is purely playing politics,” the ad states. “Exploiting personal information is a squalid excuse for journalism.”

The ad comes less than a week after Parson’s widely criticized demand for an investigation and prosecution of the reporter who discovered the security flaw in a state website, along with “all those involved.” Parson read a statement calling the reporter “a hacker” to reporters gathered outside his Missouri Capitol office last Thursday, then left without taking questions.

John Hancock, chairman of Uniting Missouri, declined to discuss any specifics about the video.

The Post-Dispatch did not respond to a call and an email Wednesday seeking a response to the video.

In the incident that enraged Parson, a Post-Dispatch reporter found that Social Security numbers for teachers, administrators, and counselors were visible in the HTML code of a publicly accessible site operated by the state education department. HTML code is the programming that tells the computer how to display a web page.

The newspaper informed the state of the problem and promised not to publish any story until the issue was fixed.

“We stand by our reporting and our reporter who did everything right,” Post-Dispatch Publisher Ian Caso said in a story in his newspaper. “It’s regrettable the governor has chosen to deflect blame onto the journalists who uncovered the website’s problem and brought it to DESE’s attention.”

Parson said the Missouri State Highway Patrol would investigate and that Cole County Prosecuting Attorney Locke Thompson had been notified.

On Wednesday, Thompson said he had not received any investigative reports from the patrol and did not expect any until the investigation had been completed.

“I do not have any sort of timetable as to how long the investigation could take,” he wrote in an email to The Independent.

The patrol did not respond to an email seeking information on the status of the investigation.

The video continuing the attack on the Post-Dispatch was posted online as Democrats on the House Budget Committee continued to question Parson’s estimate that it will take $50 million to respond “to this one incident alone and divert workers and resources from other state agencies.”

The Public Schools and Education Employees Retirement System responded to a different potential data exposure on Sept. 11 by offering all 350,000 members credit monitoring, identity theft protection, and the services of a call center through a contract with Experian, according to Dearld Snider, the agency’s executive director.

State Rep. Peter Merideth, D-St. Louis said the only thing lawmakers have been told would come from the $50 million Parson cited from the latest security breach would be credit protection and a call center for approximately 100,000 educators.

And since there is likely a large amount of overlap between the people who have education credentials registered with the education department and those who are members of the retirement system, Merideth believes the ultimate cost will come nowhere near Parson’s $50 million figure.

The retirement system does not include employees of St. Louis or Kansas City public schools and it would only include people employed in private and parochial schools if they had previously worked in public education.

“I wouldn’t be surprised if it was less than $100,000 for credit monitoring,” Merideth said.

The biggest cost, he said, will be studying the state’s computer systems and upgrading them to provide better service and security.

“It is not about what the reporter did,” Merideth said, “it is about the vulnerability and the outdated systems we have.”

Kelli Jones, spokeswoman for the governor, has not responded to requests seeking information on the cost estimate used by Parson.

The Missouri National Education Association said it is still trying to understand exactly what happened, both with the data that the Post-Dispatch found and the potential data loss at the retirement system, said spokesman Mark Jones.

“It is important we take data security as seriously as physical security,” Jones said.

The union has not joined Parson’s call for prosecution of the journalist.

“There is nothing that indicates to me,” Jones said, “that the reporter did anything but act ethically within the bounds of good journalism.”