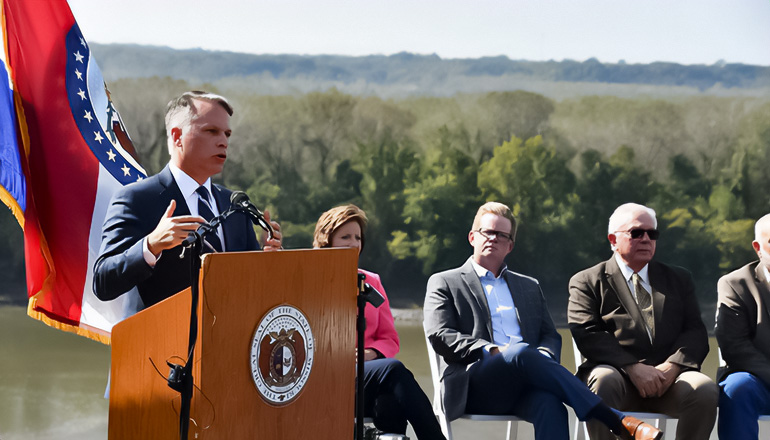 (Missouri Independent) – With $6.5 billion on the way from the federal infrastructure bill and a newly increased gas tax, Missouri is ready to take a big bite out of $4.5 billion in unfunded highway needs, Patrick McKenna, director of the Missouri Department of Transportation, said this week.

But that doesn’t mean the state is ready to tackle its biggest projects, like rebuilding and widening Interstate 70 or Interstate 44.

Instead, McKenna said in an interview with The Independent that the extra funding will be directed to as many of the more than 400 unfunded projects as possible.

The choice, McKenna said, “is one project or hundreds of projects with critical safety needs from all over the state.”

To make sure that is what Missourians want, the department will hold public hearings over the next three weeks to receive comments on the unfunded needs. The projects that can be funded will be included in the next Statewide Transportation Improvement Program or STIP.

That five-year program, updated annually in June, lays out what MODOT expects it can build with available money. The most recent plan anticipates spending $1.1 billion annually.

“We want it all buttoned up by mid-December, to inform the commission and MODOT for building the next STIP,” McKenna said. “We will incorporate estimated revenue from the motor fuel tax and increases in resources from federal sources.”

For highways and bridges, McKenna expects annual spending to increase by almost 40 percent.

“Our coming STIP is going to be pretty aggressive,” McKenna said. “But it will not fund all the currently identified unfunded needs.”

In addition to the $6.5 billion for road needs, the state should receive $484 million over five years for bridge replacement and repairs.

Other items in the Infrastructure Investment and Jobs Act for Missouri, according to a news release from Rep. Emanuel Cleaver, D-Kansas City, include:

One reason the department does not want to dedicate the new funding to one big project like widening I-70 is that it would mean neglecting roads and bridges that will only become more expensive to fix later, McKenna said.

“That is what we are trying to avoid in the present time,” McKenna said. “We fund the preservation needs of the system as we are going so we don’t get significantly behind on condition.”

To widen the 199-mile two-lane stretch of I-70 to three lanes in each direction would cost $2.5 billion to $3 billion, the department estimated last year. And while that project isn’t in the plan, improvements that will make the work go faster are underway, McKenna said.

A pair of new bridges are under construction over the Missouri River west of Columbia to replace the existing four-lane bridge. When completed, the bridge decks will accommodate four lanes of traffic in each direction, McKenna said.

One of the projects on the unfunded needs list is $62 million to partially reconfigure the U.S. 63 and I-70 interchange in Columbia. That congested intersection has created bottlenecks for decades and previous changes have not relieved the traffic tie-ups.

The project, when finished, will make the intersection ready for three lanes of traffic, McKenna said.

“All of the overpasses replaced in the last 3 years have been built to enable a six-lane I-70,” he said.

The infrastructure funding is dedicated to particular needs but Missouri is also sitting on billions with fewer restrictions. At the end of October, the state was holding $1.34 billion from the American Rescue Plan signed by Biden in February and more than $2 billion in surplus general revenue from state income and sales taxes. The department will ask lawmakers for some of that money, McKenna said.

“It will be up to policymakers to determine if some of those other funding sources would be more suitable for that investment than not,” McKenna said.

The water infrastructure spending in the bill, the second-largest allocation for Missouri, will be used to make more funding available through loan and grant programs operated by the Department of Natural Resources, spokeswoman Connie Patterson wrote in an email.

Missouri has the 6th most lead service lines, the pipes that carry water from water mains into residents’ homes, of any state in the U.S. Only Illinois, Ohio, Michigan, New York, and New Jersey have more lead pipes than Missouri.

The department anticipates it will learn allocation amounts and instructions for making applications from the Environmental Protection Agency, she wrote.

Two State Revolving Funds, one for drinking water and one for wastewater, provide low-interest loans and grants. Lawmakers appropriated more than $500 million from the two funds for the current fiscal year.

“The department offers funds through an annual application process that prioritizes financing for eligible projects that address human health and compliance,” Patterson wrote.

The department must analyze the new federal spending and determine how much state funds are needed to match the money, Patterson wrote.