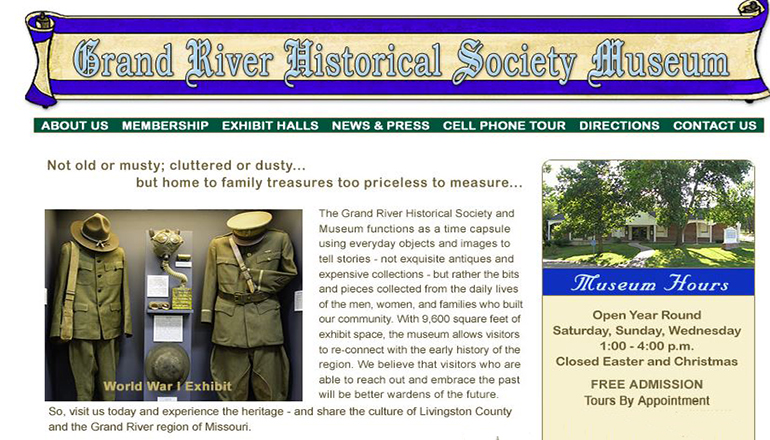 Share
Tweet
Reddit
Share
Pin
Share
0 Shares
The Grand River Historical Society Museum’s quarterly meeting held Tuesday evening April 11 that attracted over 140 history enthusiasts to the Chillicothe Elks Club for the program on the 1838 Nineteen Day Mormon War presented by Doug Doughty and Charlie Peniston.
Doug spoke first and revealed that his family had been in the area for five generations beginning in  1830 when his great great grandfather William Perry relocated to Missouri.  Perry joined the Missouri militia and was honored for his bravery in the battle by Missouri governor Lilburn Boggs who issued the Executive order decreeing that the Mormons either had to leave Missouri or they would be exterminated.  He noted that Mormon was the first religion which had its beginning in America.  Its founder Joseph Smith preached that when Jesus returned to earth it would be in Missouri, either Independence or the Caldwell/Davies County area.  Due to this declaration thousands of Mormons moved to the two counties much to the consternation of the residents who had settled in the area.  In an effort to prevent bloodshed the legislature brokered a deal to designate Caldwell County as a Mormon settlement and Daviess and the other surrounding counties as the location of the settlers.
Then Charlie took over to cover the rapidly increasing animosity between the settlers and the Mormons.  His family migrated to the area in 1931 and one of his ancestors was in law enforcement eventually becoming a county sheriff in 1840.  Joseph Smith decided that the Mormons should have both Daviess and Caldwell County but they had no political voice because they weren’t allowed to vote due to not having paid taxes although they met all the other requirements.  This incensed them so they gathered their troops, attacked Gallatin and set the city on fire and the war was on.  The settlers countered by assembling their troops and attacking at Haun’s Mill where they killed 17 Mormons and destroyed the Mormon’s homes—the surviving Mormons fled to Nauvoo Illinois and the war was declared over in only nineteen days.
Representatives of both sides of the conflict were present at the meeting and recognized that regardless of their religious preference the Nineteen Day Mormon War is a large part of the history of our area and was a very important subject for the Museum to present.
Post Views: 129