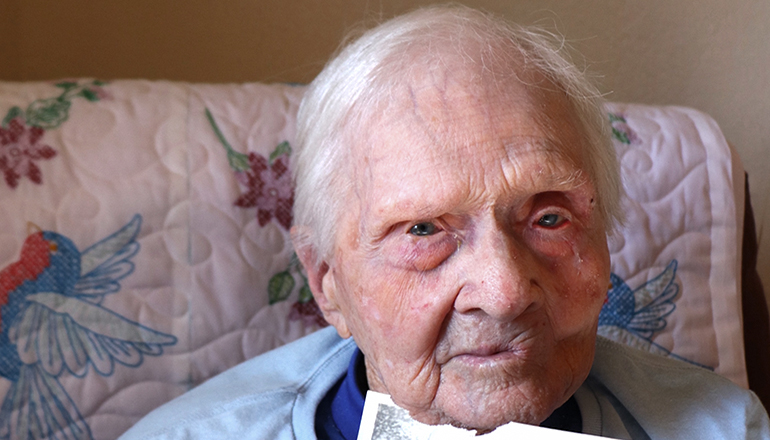 But Cox endured no harder day than Oct. 31, 2022, when she sold the farm that had been in her family for more than a century.

Cox was born on the family farm near Bogard in Carroll County on Sept. 17, 1922. She lived there for 92 years, then lived with a widowed female friend before moving to an assisted living facility recently. The youngest of six children, Cox started farming at age 11, when her father lost a leg to disease. Her father had grown up with a series of foster parents, one of whom had beaten him so severely with a hickory switch that he would fight infections in his leg throughout his life.

Young Wilda took over many of the farming duties for her father, a sharecropper on 64 acres of land. She became the extra set of eyes, ears, hands, and legs that allowed him to continue farming and take on other jobs such as setting poles for the local telephone exchange. She became the caretaker of a team of horses during the Great Depression and after. She traveled mud roads to peddle eggs, milk and cream at the nearby Mandeville country store. During the drought of 1934, she helped dig a well by hand on the family farm. During her eight years of school, she milked cows and did other chores before and after school. “It was work, work, work,” she says.

When she was 16, her dad gave her a calf named Boots. She fed it cornmeal mush and milk, and it bore three heifer calves in a row. “That put the kid in the cattle business,” she says. That Angus calf would become the backbone of the “Circle J” brand, which would later fetch top prices at local sale barns.

Wilda’s dad died when she was 21. She assumed the lease for the farm ground and helped her mother. A diminutive 5’2”, Wilda was a gritty powerhouse, cutting wood with an axe to heat the house and shooting squirrels for their meals. By doing seasonal routines of cutting corn in the morning and cutting wood in the afternoon, she was ready for winter by Thanksgiving.

Wilda had the benefit of learning skills and resourcefulness from her father and grandfather, who was a carpenter.

Friend Randy Rodenberg recalls when he and his wife went to check on Wilda one harsh, icy winter day in the 1980s. They worried when they couldn’t find her inside her home and were relieved to find her in the cattle lot caring for her animals. She had made snow treads for her boots from horseshoes.

She also learned by doing – whether learning to use a chainsaw, shooting a gun, or climbing a telephone pole. Her formal farm training came from reading every farm magazine she could lay her hands on. “Oh, what I haven’t done ain’t worth telling,” she says.

In 2015, at age 93, she attended Pearls of Production, a University of Missouri Extension program for women in animal production. MU Extension swine specialist Marcia Shannon, one of the organizers, remembers that Wilda enjoyed meeting other women farmers and the hands-on sessions.

Over the years, Wilda has met a series of extension agents and specialists, most of whom she has outlived. One of them, MU alumnus Jim Heitmeyer, also 100, recently received special recognition at the annual Tweedie Agri-Business Forum for his 40 years as a livestock specialist for MU Extension.

When she was 24, Wilda Smith married James Olsen Cox, who worked on a neighboring farm and had a sawmill. They married at the church parsonage and celebrated with a noon lunch. They honeymooned that afternoon by cutting telephone poles for the local exchange. She would eventually travel three times to Arkansas, but no farther, content to be needed at home.

In 1955, they bought their first tractor, a John Deere. They bought 48 more acres in 1957 and another 288 acres in 1961. They plowed under the land’s sweet clover crop and planted Sudan grass and rye for pasture and hay. In 1958, they were among the first to use artificial insemination in their cattle herd.

In the meantime, they built a herd of 80 by trading two bull calves for one heifer. They implemented a herd improvement system and maintained a detailed record-keeping system. Records of the farm’s income and expenses go back to the 1800s.

While she remained the backbone of the farming operation, she credits her late husband with a keen ability to spot a good bloodline of cattle. “He didn’t know sic ’em about farming. What he learned, he learned from me,” she says. But he did know a good cow when he saw one, a quality that helped them build the “Circle J” brand into a sought-after commodity at local sale barns.

Farming has not been without its dangers. She’s been kicked, stepped on and knocked to the ground by cows and horses. She broke a hip in 2019 and developed mouth cancer that required extensive facial surgery.

Farming today requires less physical work and more money than it did when Wilda started farming, but she offers some advice for others. “Buy little by little. Don’t try to buy the whole county. Find a mentor and you have to be there,” she says.

Finally, “When you plant, pray to the Lord to give you a good harvest.”

She is grateful for the good harvest of a long life doing what she loves to do – farm.

(Article by Linda Geist with photos by Marcia Shannon.)